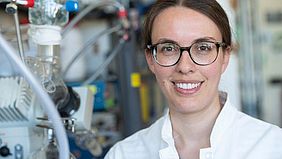 Until a few years ago, ribonucleic acid (RNA) was mainly used as a carrier of genetic information. Most of our genetic material is translated into RNA, but only a few percent of the RNA strand provides the blueprint for the production of proteins in the cell. In the meantime, science has recognized that non-coding RNA is anything but meaningless letter waste: it plays an important role in many processes in living cells. “But we are far from understanding how the different mechanisms of non-coding RNA work,” says Dr. Stephanie Kath-Schorr from the LIMES Institute of the University of Bonn.

The scientist has raised funds from the nonprofit Boehringer Ingelheim Foundation for a research project that will develop new methods to study the folding, structure, localization and transport of specific cellular RNAs in test tubes and in living organisms. The foundation has now approved almost 800,000 euros for the next three years through its PLUS 3 program for the junior research group at the University of Bonn. Kath-Schorr wants to attach signaling molecules as markers to monitor what the noncoding RNA does. “Such site-specific labels are so far limited to short RNA sequences,” says the scientist. With the new project she now wants to find a way how to mark several hundred to thousands of nucleotides. For this purpose, approaches from chemical biology are used; to introduce the modifications an extended genetic alphabet is used.

On the basis of the markings, Kath-Schorr wants to find out more about the structure and the spatial changes of the apparently meaningless RNA. The RNA strands can be “bent” by the presence of, for example, metal ions or proteins. Depending on this, new reaction possibilities and processes open up. With such experiments, the scientist from the University of Bonn wants to find out more about how non-coding RNA regulates the mechanisms in living cells.

The Boehringer Ingelheim Foundation is a legally independent, non-profit foundation that promotes medical, biological, chemical and pharmaceutical science. It was built in 1977 by Hubertus Liebrecht, a member of the shareholder family of Boehringer Ingelheim. With its perspective program "Plus 3" and the "Exploration Grants", it promotes excellent independent junior research groups nationwide.