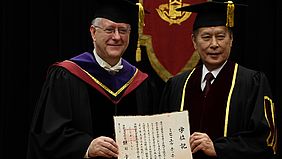 The President of the Waseda University Kaoru Kamata handing over the certificate of appointment to Rector Michael Hoch. photo: Dennis Nasser/Uni Bonn

The development biologist Michael Hoch is only the tenth German who is awarded the honorary doctorate of the Waseda University, including personalities like the Federal Presidents Joachim Gauck and Richard von Weizsäcker.

Professor Hoch has set up the Life and Medical Sciences (LIMES) Institute at the University of Bonn. Since 2006 he has been committed to the academic exchange of the two universities. Over 100 scientists, students and doctoral students have participated in the various exchange programs, symposia and workshops since then.

With this honorary doctorate, the Waseda University expresses its great respect for Professor Hoch's extraordinary academic achievements. The award ceremony was held during the "Bonn Day" to mark the 50th anniversary of the partnership anniversary. In the coming year, when the University of Bonn will celebrate its 200th anniversary, there will also take place a special "Waseda Day" in Bonn.

Rector Professor Hoch received his appointment certificate from the hands of Waseda President Kaoru Kamata. The new honorary doctor thanked his hosts and emphasized: "I gratefully accept this award, representing today all those who have lived the university partnership Bonn-Waseda for 50 years. It is one of the most stable and intensive links between the University of Bonn and Asia. I am proud to have contributed as a scientist and as rector."