The most important German youth award will be awarded on May 5 in Berlin. 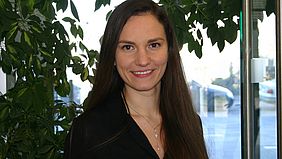 The immunologist Prof. Dr. Elvira Mass (33) and the mathematician Dr. Georg Oberdieck (31) from the University of Bonn, together with eight other excellent people, receive the Heinz Maier-Leibnitz Prize, the most important award for young scientists in Germany. This was decided by a selection committee set up by the German Research Foundation (DFG) and the Federal Ministry of Education and Research (BMBF) in Bonn. The award is each endowed with 20,000 euros. The award ceremony will take place on May 5 in Berlin.

A total of 126 proposals had been examined in this year's price round. The committee responsible made the selection, chaired by the DFG Vice President and mathematician Prof. Dr. Marlis Hochbruck.

Rector Prof. Dr. Dr. h.c. Michael Hoch said: "On behalf of the University of Bonn, I congratulate Prof. Mass and Dr. Oberdieck warmly to this great success, which is a well-deserved recognition of their outstanding scientific achievements. In doing so, they will also become role models for many young scientists at our university who are in the early stages of their academic careers. ”

Prof. Dr. Elvira Mass examines the development and function of macrophages, i.e. cells of the innate immune system. With her work, she has contributed groundbreaking insights into the molecular basis of the role of tissue macrophages in organogenesis - the formation of the organs during embryonic development - which she was able to publish in a high-ranking publication. The knowledge they have gained contributes to a better understanding of certain diseases, such as osteopetrosis, which leads to an accumulation of bone substance, or neurodegenerative diseases, which are caused by mutation-bearing microglial cells. Elvira Mass received her doctorate in Bonn, then did research in London and New York, until she returned to the LIMES Institute at the University of Bonn as a junior research group leader, where she was recently appointed W2 professor.

Dr. Georg Oberdieck works in the field of algebraic geometry. This is about examining geometric objects described by fairly simple equations. Since there is a large variety of them, the question often arises how many objects of a certain type appear in certain contexts. Such counting tasks are called enumerative algebraic geometry. Specifically, such counting problems arise, for example, in theoretical physics. Oberdieck has solved such problems in concrete physical contexts and has also described the mathematical structure of these objects much better than was previously the case. His work "Gromov-Witten theory of elliptic fibrations: Jacobi forms and holomorphic anomaly equations", written with Aaron Pixton, is particularly influential. In this work, both authors demonstrate their impressive understanding of methods from various fields, which they virtuously apply to their core questions.