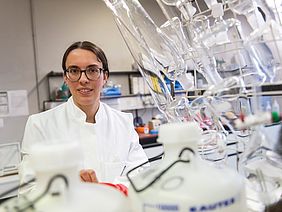 Dr. Stephanie Kath-Schorr from the LIMES Institute of the University of Bonn in the laboratory. (c) Photo: Barbara Frommann/Uni Bonn

Ribonucleic acids (RNA) ensure that the blueprint in the cell nucleus is translated into vital proteins and that cell functions are regulated. However, little is known about the structure and function of particularly long RNAs, which consist of hundreds or thousands of building blocks. Chemists at the University of Bonn have now developed a new method for this purpose: They mark the complex molecules with tiny "flags" and measure the distances between them with a "molecular ruler". The results are published online in advance in the journal "Angewandte Chemie International Edition". The print version will be published shortly.

In living cells, everything follows a plan: The blueprints for all building and operating materials are stored in the cell nucleus. If, for example, a certain protein is required, the genetic information is read from the DNA and translated into ribonucleic acid (RNA). The RNA transmits the blueprint to the cell's "protein factories", the ribosomes. “However, more than 80 percent of ribonucleic acids are not involved in the production of proteins at all," says Dr. Stephanie Kath-Schorr from the LIMES Institute at the University of Bonn. This so-called "non-coding" RNA is probably involved in various regulatory processes in the cell.

Scientists would like to gain a much better understanding of the control processes that non-coding RNA is responsible for. "To do this, however, we must first understand the structures of ribonucleic acids and how they are folded," says Kath-Schorr. The spatial structure seems to have an important role in the function of RNA. It determines which molecules a certain RNA binds to and therefore triggers important processes in the cell.

A team of chemists from different institutes at the University of Bonn has now jointly developed a method to elucidate the structure and folding of particularly long RNA molecules. "Shorter RNAs can be examined using crystal structure analysis, but this method is very difficult to use when it comes to large and flexible ribonucleic acid complexes," explains first author Christof Domnick. The scientists were therefore looking for a new way to create RNAs consisting of several hundred or even thousands of building blocks.

The scientists around Dr. Stephanie Kath-Schorr first inserted two artificial letters into a DNA sequence, which do not occur in this form in nature. In the subsequent transcription into RNA, these artificial letters served as a kind of "flag" to mark specific locations on the ribonucleic acid, which comprises several hundred building blocks.

The researchers used the PELDOR method to measure the positions of the labels on the RNA. "The distance between the 'flags' can then be measured as if with a ruler at the molecular level," says Prof. Dr. Olav Schiemann from the Institute of Physical and Theoretical Chemistry at the University of Bonn. The markers can be placed at different locations on the ribonucleic acid and the distance between these flags can then be determined. This data is used to create an image of the structure and folding of RNA.

"We have previously experimented with shorter RNAs and compared the results with theoretical simulations," said Kath-Schorr. "The correlation was very high and the method is therefore reliable." In future, the structure of long RNAs could also be recorded in three dimensions if the labeled ribonucleic acids are recorded from different perspectives.

"Our long-term goal is to measure RNA structures directly in the cell," said the biochemist. "But that's still a long way off." The basic method has great potential for application. For example, RNAs serve as important markers in cancer diagnostics. Kath-Schorr: "Our new method for the structure elucidation of long, non-coding ribonucleic acids can make an important contribution to a better understanding of cellular processes."