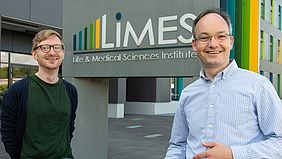 A congenital disorder of the fat metabolism can apparently cause chronic hyperreaction of the immune system. This is the conclusion reached by researchers from the University of Bonn in a recent study. The results are published in the journal Autophagy.

Some individuals suffer from a genetic defect that causes their cells to form an unusual kind of fat. The consequences of this very rare disorder are grave. In some patients, the nerve cells responsible for transmitting pain die over time; others lose their hearing or suffer early-onset dementia. A frequent symptom are also skin defects that only heal with great difficulty or even become chronic.

It has been known for several years that the underlying mutations alter an important enzyme in the fat metabolism. The enzyme normally produces a certain type of fat. Due to the mutations, however, it now uses the wrong building block. This causes large quantities of so-called deoxysphingolipids to be produced in the body's cells - around ten times more than normal. "These exotic molecules have the disadvantage that they can only be degraded very slowly," explains Dr. Lars Kürschner from the LIMES Institute at the University of Bonn (the acronym stands for "Life and Medical Sciences"). "In high concentrations they also form crystal-like lumps in the affected cells."

The consequences for the cells are anything but pleasant, as the adjunct professor together with colleagues already noted in 2017: The fat crystals massively disrupt the function of the mitochondria, i.e. the cell's internal powerhouses. Particularly cell types with a high energy requirement can suffer so much that they perish. "This mainly affects the nerve cells," says Kürschner. "This is also the reason for the impaired pain transmission and other neurological symptoms." In their current work, the researchers were also able to detect such mitochondrial defects in connective tissue cells of mice.

The fact that they were also able to track down another effect is due in part to preliminary work by colleagues in Bonn: Some time ago, the immunologist Prof. Dr. Eicke Latz from the University Hospital in Bonn showed that cholesterol crystals can cause inflammatory reactions. Cholesterol is also a fat. "We therefore wanted to find out whether the deoxysphingolipid crystals also have an effect on the immune system," explains Kürschner.

To this end, the researchers examined certain immune cells of the mouse, the macrophages. In a sense, they are the body's own garbage collection system: After a cell has died, its remains are taken up by macrophages, digested and thereby disposed of. In the course of the disease, macrophages, like nerve or connective tissue cells, also produce large amounts of deoxysphingolipids. At the same time, they also absorb the abnormal fats of dead cells in their capacity as garbage trucks. In other words, they get twice the dose of fat crystals.

This process massively disrupts the function of various cell components, such as the mitochondria, in these macrophages (as in neurons and other cells). They respond by dismantling the damaged powerhouses in order to produce new mitochondria from their components - a mechanism known as autophagy. "Nerve cells and connective tissue cells also do this," says Mario Lauterbach, lead author of the study. "However, macrophages are immune cells; this means that they have additional options for perceiving damage and reacting to it. One of them is that in autophagy they activate a molecular complex that promotes inflammation, known as the inflammasome."

The activated inflammasome in turn causes the macrophage to release inflammatory messengers. In this way it calls on other immune cells for help, including other macrophages, which further intensify this effect. "One consequence of the accumulation of these abnormal fats is therefore a manifesting inflammation," explains Lauterbach. This may be responsible for the poorly healing wounds observed in many patients. The researchers now hope that these symptoms can be treated with drugs that inhibit autophagy. "There are already some candidates that are currently being tested," emphasizes Lars Kürschner.

The results could also shed new light on a much more common condition: diabetes. In diabetes patients, deoxysphingolipid production is also increased in some cells; the cause is still largely unknown. And in diabetes, too, physicians regularly observe severe chronic inflammation, which contributes to the serious effects of the disease.

The success of the study is also the result of the excellent cooperation between the LIMES Institute and the Institute of Innate Immunity on the Venusberg, headed by Prof. Latz, emphasizes Kürschner. Both groups have been working together intensively for years, including in the Transregional Collaborative Research Center 83 and the Cluster of Excellence ImmunoSensation at the University of Bonn. He adds that a further factor is the outstanding equipment with state-of-the-art microscopes and analysis devices, which has been further improved by the success in the Excellence Initiative and is unparalleled in the university landscape.