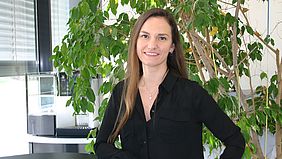 Dr. Elvira Mass at the LIMES Institute of the University of Bonn. © Foto: Silvia Hoch/Uni Bonn

Dr. Elvira Mass from the LIMES Institute of the University of Bonn receives a coveted Starting Grant from the European Research Council (ERC). This will mean a subsidy of 1.5 million euros over the next five years. The scientist wants to investigate the influence of nanoplastics on the development of neurological diseases.

With Starting Grants, the European Research Council honors outstanding junior researchers. The funding from Brussels will amount to 1.5 million euros over the next five years. Dr. Elvira Mass from the LIMES-Institute of the University of Bonn wants to investigate an omnipresent but understudied environmental risk for our immune system: the pollution caused by small plastic particles. "These particles, which decompose over time into micro- and nanoplastics have been detected in a variety of ecosystems," says Dr. Elvira Mass. "They are speculated to enter and spread in the food web all the way to humans."

Ingested nanoparticles can translocate from the gut from the lymphatic and circulatory systems and cross the blood-brain barrier in mammals. Mass: "However, the long-term bioavailability and toxicity of nanoplastics in many organs, and especially in the brain, is not known." Microglia, as the major neuroimmune cells, not only have a defensive function, but they constantly detect and respond to environmental changes, so that the nerve cells can maintain their homeostatic function. "Among other things, we will use animal models to investigate which types of nanoplastics reach the brain and are taken up by microglia" says the scientist. The aim is to investigate whether this leads to an acute or chronic activation of these immune cells and thereby causes neurological disorders. Behavioral as well as cellular and molecular changes in the brain, which occur after ingesting nanoplastics, will serve as important clues.

Basic research on the effect of nanoplastics on the brain

"This project will enable us to gain insights into the environmental pathogenesis of neurological diseases that can be triggered by nanoplastics in our environment," says Dr. Elvira Mass. "Implementation depends on funding from the ERC." The project dubbed “NanoGlia” is an interdisciplinary project that addresses the long-term health risks of nanoplastics. The Nanoglia team will use new techniques, such as single-cell sequencing, to understand the molecular mechanisms triggered by nanoplastics in great depth. A doctoral candidate and a post-doctoral fellow will be involved in the project.

Elvira Mass, born in 1986 in Semipalatinsk (Kazakhstan), obtained her doctorate in biology from the University of Bonn at the LIMES Institute. Later, she conducted research at the Memorial Sloan-Kettering Cancer Center (USA) and at King's College London (UK). Since October 2017 she leads a research group at the LIMES Institute of the University of Bonn. Mass has won several awards, including the Bright Spark Award at the European Immunology Congress in the Netherlands.