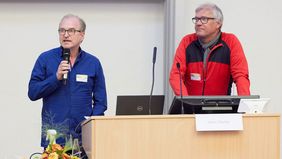 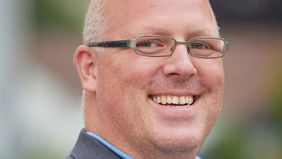 The tremendous advances made in experimental life sciences in recent years provide a wealth of data on how organisms function. To gain biomedical knowledge from these data, both mathematical modeling and numerical analysis techniques in conjunction with experimental data are essential. At a joint symposium of the Clusters of Excellence Hausdorff Center for Mathematics and ImmunoSensation2 as well as the Transdisciplinary Research Areas "Modelling" and "Life and Health" of the University of Bonn, the professors working at the interfaces and their colleagues presented their research and invited to participate.

This undertaking has gained significant momentum this year, as the three professorships have been fully occupied since April. Prof. Jan Hasenauer, who has been building up his research group "Computational Biology" for some time, has been joined by Prof. Kevin Thurley ("Systems Biology of Inflammation") and Prof. Alexander Effland ("Biomedical Image Processing"). All three are also members of the Transdisciplinary Research Areas (TRA) "Mathematics, Modelling and Simulation of Complex Systems" and "Life and Health" of the University of Bonn, in which the close connection of the two research areas also plays a major role.

“I firmly believe that biomathematics and methods of modeling getting together with various fields of biosciences will actually shape the 21th century,” says Prof. Waldemar Kolanus, Speaker of the Cluster of Excellence ImmunoSensation2 and the Transdisciplinary Research Area "Life and Health". "One can clearly observe how the life sciences are becoming an inspiration for mathematicians and vice versa, like maybe it was in the 20th century for physics and mathematics. There is a really interesting novel road ahead of us. This has just being the starting point.”

The aim of the symposium "Interdisciplinary Research in Mathematics and Life Sciences", which has now been held for the first time on August 30, was to provide an overview of research in Bonn, to promote networks and to initiate new collaborations. The thematic core was formed by the research areas of the three IRUs. Among the participants were scientists from the University of Bonn and the University Hospital Bonn as well as from cooperating institutions. The symposium took place in the lecture hall and was broadcast online.

Jan Hasenauer's research focuses on the development of mathematical and computational methods for the data-driven analysis of coupled, biological processes. These methods facilitate the model-based integration of different datasets, the critical assessment of the available information, the comparison of competing biological hypothesis and the tailored selection of future experiments. For example, in a TRA "Life and Health" project, Jan Hasenauer is working with colleagues to decipher cellular organization in human cervical lymph nodes. His research group uses mathematical models and computational artificial intelligence to reconstruct properties of the system which cannot be assessed experimentally. Following the philosophy of Galileo Galilei: “Measure what can be measured, and make measurable what cannot be measured.” The research group is located at the LIMES Institute.

Kevin Thurley works as a professor for biomathematics since February. His research focuses on a point of intersection of biology and mathematics. He made contributions in several research areas, for example, the biological clock, stochastic intracellular signals, and regulations of cell motility. A focus of his work is the analysis of networks of cell-cell-communication in the immunity system. His group, therefore, develops spatial models in the form of reaction-diffusion systems as well as complex network models which allow the integration of directly measurable changes of states of cells. It is a special concern of Kevin Thurley to improve the collaboration of biologists and mathematicians and to facilitate mutual understanding. His research group is located at the Institute for Experimental Oncology at the University Hospital Bonn.

Alexander Effland was appointed as professor of biomathematics in April. He and his research group are concerned with mathematical image processing, the analysis of deformations of two- and three-dimensional objects, and the mathematical foundations of machine learning. The aim is to develop stable and efficient algorithms for image processing that can be applied in biomedical research. For example, in a current project in collaboration with the Department of Neuroradiology at UKB, he is working on automated classification of brain hemorrhages using artificial intelligence. His professorship is located at the Institute of Applied Mathematics.