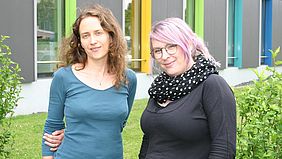 “Lorenzo's Oil” was to help a seriously ill boy suffering from a peroxisomal disorder (adrenoleukodystrophy/ ALD). The true story was turned into a film which made the rare disease well known. Scientists from the University of Bonn, the German Center for Neurodegenerative Diseases and the German Cancer Research Center investigated such peroxisomal diseases on fruit flies. They were able to prove that a coconut oil diet significantly increases the vitality and lifespan of the flies. The results will now be presented in the journal “PLOS Biology”.

The 1992 film drama tells the true story of Lorenzo Odone, who suffered from the rare disease adrenoleukodystrophy (ALD), which results in damage to the nervous system. The parents’ desperate search for treatment eventually leads to “Lorenzo's Oil”. The rare hereditary disease arises from the dysfunction of so-called “peroxisomes”. These are tiny bubbles surrounded by a membrane that are mainly responsible for detoxifying the cells. In addition to harmful hydrogen peroxide, very-long-chain fatty acids in particular are also metabolized there.

If the peroxisomes are damaged or absent, a toxic accumulation of very-long-chain fatty acids occurs. While science has so far primarily focused on these very-long-chain fatty acids as the cause of the disease, a research team around Dr. Margret Bülow at the LIMES Institute at the University of Bonn investigated the importance of medium-chain fatty acids. “These fatty acids are much more frequent than the very long-chain ones,” says Bülow. “Their importance has been underestimated so far.”
The research team used fruit flies as a classical model organism. The flies lacked a gene that encodes an important building block for the peroxisomes, which prevented the detoxification factories from working properly. The disease resembled peroxisome dysfunction in humans: Brain cells in the flies had died, so they could neither fly nor crawl. “What was striking about these animals was that they showed a medium-chain fatty deficiency,” reports lead author Dr. Julia Sellin. “It is precisely these fatty acids that serve as fuel for energy production in the cell power plants - the mitochondria.” It was therefore reasonable to assume that additional feeding with the deficient fatty acids could compensate for the damage.

Flies on a coconut oil diet

The scientists therefore put some of the flies with the missing gene on a diet of coconut oil, which is rich in medium-chain fatty acids. A control group was fed conventionally. It was found that only about 20 percent of the fruit flies larvae raised on standard food developed further into adult specimens. Most of these died within 24 hours, while the normal life expectancy is around 40 to 50 days. In contrast, about 55 percent of the larvae fed with coconut oil produced adult fruit flies that survived for several weeks. “With the diet, the fruit flies suffering from the peroxisome disorder are able to survive, which is not possible on a conventional diet,” summarizes Dr. Christian Wingen, the second lead author.

The damaged fly larvae showed symptoms of hunger stress. In the search for the causes, the team of researchers discovered lipase 3. This is an enzyme that mobilizes fatty acids from the storage fat as fuel when there is a lack of food. Lipase 3 was upregulated to provide more energy. However, in peroxisome diseases the mitochondria are affected, which is why the fatty acids could not be completely processed and accumulated to a toxic amount. Bülow: “This is probably the cause of death of the flies.” Another important role is played by “ceramide synthase Schlank”, which was discovered several years earlier at the LIMES Institute. If the synthase is outside the cell nucleus, lipase 3 is upregulated, which leads to the described damage. The coconut oil diet however dampened the increased activity of lipase 3, thereby reducing cell damage. A team of researchers led by Dr. Reinhard Bauer was recently able to show that Schlank is involved in the regulation of lipase 3.

Can the fruit fly findings be transferred to humans? The researchers also investigated human cell lines derived from patients with peroxisomal biogenesis disease. These too showed that without a coconut oil diet, the mitochondria swell and free fatty acids accumulate in toxic concentrations. “We were able to transfer some aspects that we observed on flies to human cells,” summarizes Bülow. This is an important indication for a possible therapy approach in humans. “But there is still a lot of research to be done.”