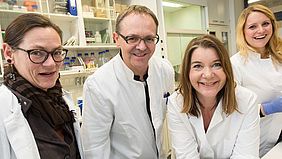 Scientists at the University of Bonn have clarified a surprising dual function of ceramide synthase. The enzyme not only catalyzes a central step of the production of vital lipids. It also has the ability to turn genes involved in lipid metabolism on or off. The study is being published in the renowned journal “Cell Reports”.

Ceramide synthases link fatty acids with certain amino acids to form so-called ceramides. These take on a number of vital functions in the organism. Their significance is so considerable that the enzymes which produce them have barely changed over many millions of years of evolution. For example, the ceramide synthase of the Drosophila fruit fly is very similar to that of humans. However, in contrast to the insect which is only a few millimeters in size, we have six different variants of the enzyme.

Nevertheless, the fruit fly is ideal for studying ceramide synthase. The insect may now even provide the answer to a question that has been bothering molecular biologists for some time. Because most ceramide synthases have not only one region for binding the fatty acid to the amino acid: “In addition to this catalytic center, the ceramide synthase often also has a so-called homeodomain”, explains Dr. Reinhard Bauer, lecturer at the LIMES Institute of the University of Bonn.

Homeodomains are protein regions that are usually binding to DNA. They are found mainly in transcription factors. These are proteins that attach to the DNA and thus for instance prevent certain genes from being read. However, until now it had been believed that ceramide synthases do not come into contact with DNA at all. But what would then be the purpose of the homeodomain?

“We were able to show that the ceramide synthase in fruit flies is also anchored in the inner membrane of the cell nucleus”, explains Mariangela Sociale, the first author of the study. In all animals, the nucleus acts as a kind of library that contains the DNA and thus the genetic information. The transcripts of the genes that the cell currently needs are generated in the nucleus. “The ceramide synthase can bind to certain regions of the DNA here and shut down particular genes”, says Sociale.

However, the synthase does not do this arbitrarily, but dependent on the fly’s nutritional status. If the fly is starving, the ceramide synthase releases its grip. Thus, one of the effects is that the gene for the lipase 3 can now be read. Lipase 3 breaks down fat into its components, which can then be used to generate energy. If there is enough food however, the gene for lipase 3 remains blocked. Fat is not broken down, but deposited as an energy store for leaner times in specialized depot cells. “The ceramide synthase therefore has an important control function in lipid metabolism”, emphasizes Bauer.

Several years ago, the scientists from the LIMES Institute already discovered a mutation which resulted in fruit flies losing weight. The researchers consequently named this genetic mutation “Schlank”, meaning ‘slim’ in German. “We now know that a mutation within the homeodomain can lead to this Schlank phenotype”, explains Bauer. “As a result, the enzyme can no longer bind to the DNA.” The fly consequently constantly forms lipase 3, even if nutritional conditions are favorable. It is therefore unable to build up a fat depot.

Interestingly, this effect disappears when researchers insert an intact mouse ceramide synthase gene into the Schlank flies. “The mouse gene is thus apparently also able to regulate the lipase activity in the fly”, explains Dr. Bauer. “And this is dependent on the nutritional status. This suggests that the homeodomain plays a role in mammals and, presumably, also in humans that is similar to its role in Drosophila.”

The ceramide synthase may therefore generally be a central control center in the lipid metabolism. This would make the homeodomain a promising new target for drugs, for instance against obesity or diabetes. The transcription factor function of ceramide synthases may also play a role in other diseases such as the rare, incurable Zellweger syndrome.